With the state owned airline company Turkish Airlines serving the world, the new Istanbul Airport, praised worldwide for its magnificence, has come to redefine the very idea of ​​the airport, no longer a place of departure for travel and transit but also luxury and sensory experiences in the plural.

The former Atatürk International Airport is gone. With cosmic strategic influence, its replacement is now Istanbul Airport. And what an airport! It should eventually become the largest in the world. Costing 10.25 billion euros, it is the largest and the most expensive development project in the Turkish history. A new hub around the Mediterranean, a new ultra-modern gateway to the Middle East and the world, the new airport is also the new emblem of the Turkish Airlines flagship, with its 300 international destinations.

Occupying part of a 76.5 million square meter complex, the first phase of the airport, with two runways and an annual capacity of 90 million passengers, has a terminal of 1.4 million square meters – including a ceiling height ranging between 28 and 44 meters – and 143 walkways. When the other five phases and four terminals are completed by 2028, the six-run Istanbul Airport will be able to host 200 million passengers a year. It will be then the busiest airport in the world.

The architecture of the airport, inspired among other things by the Bosphorus and the seven hills of Istanbul, further reflects the grandeur of the history of the Ottoman Empire and Turkey as well as all the cultural richness of Istanbul – embodying 313 domes of the numerous buildings filtering sunlight and evoking the historic structures of the city. Architects have also created immense “flow tunnels” bordered by 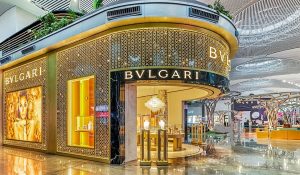 countless fashion and luxury boutiques (pieces of art for some) selected and brought together by the French group Interbrand Paris, world leader in

Turkish fashion and lifestyle brands are equally represented, with names such as Vakko, Desa, Mehry Mu, Saat & Saat or Gilan. Lounges, premium services and Unifree Duty Free stores alongside of countless cafes, restaurants and gourmet and tasting counters – taste the tasty mezze, gooey and cheesy künefe, local specialties as essential as the splendours of the new mega airport, definitely the hub of all the senses!