In this monthly series, IFA Paris alumni share how their studies at IFA Paris have paved the way to land their dream job. This month, we sit down with Vanessa Tafoya, graduate of the Bachelor Fashion Marketing, where she tells us how studying at IFA Paris has given her the right tools to start her upcycling brand.

Name: Vanessa Tafoya
Nationality: American
IFA Campus: Paris
Program studied: Bachelor Fashion Marketing
Favorite course: Branding because it teaches you how to be intentional about what you communicate to your audience when marketing your brand
Current project: Working as an apprentice at IFA Paris and starting my own upcycled clothing brand
Fashion inspiration: Pre-loved clothing because it tells a story and is an easy sustainable choice to make

Tell us a bit about yourself and your background – who you are, where you come from and what got you interested in studying fashion? 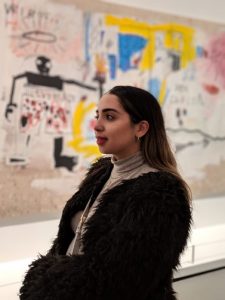 I’m from Los Angeles, the United States, and from a very early age I found my one true passion was fashion and styling. I also started learning French when I was ten and the more my two passions grew, the more I knew I wanted to combine them.

I found IFA Paris and I found it to be the perfect place for me. I knew what my end goal was and I appreciated that IFA Paris’ course offering really hit all the important aspects I wanted to learn.

What are you currently doing and what’s most exciting about it?

After some reflection, I’ve decided to start an upcycled-clothing brand which is about taking statement pieces from different decades and adapting them into wearable fashion for today. I feel like I’ve always appreciated pre-owned clothing, particularly from the 80’s, and how there is already beauty in pieces from previous decades.

It’s exciting because I never pictured myself starting a brand, but I realized I wanted to start this to share my love and passion with other people.

What skills did you learn at IFA Paris that helps you in your current role?

At IFA Paris I learned how to be organized and I learned strong marketing tools that help bring broad concepts into something more concrete when launching a business. Also, the different cultures and the fashion and art references.

What words of wisdom do you have for current and any future IFA Paris students?

Take advantage of being placed in a fashion capital like Paris and the many resources available to fashion students. Don’t be afraid to risks!

If you could choose three things to include for an IFA Paris “survival toolkit”, what would they be?

A Business of Fashion subscription (online magazine), a laptop, and a good attitude. 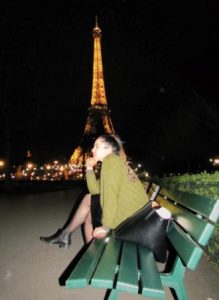 Cheap eats: It’s this place called Happy Nouilles for Chinese, specialized in soups for a really good price
Place to hangout with friends: The Opera/Pyramides district because there is a lot of fashion and food
Getting around: An app called CityMapper, it’s a life saver!
Relaxing: Getting a Velib (rentable bicycle) and cycling through the many “faces” Paris has to offer
Favorite word in local language: Genre (“like” in English); I say it so much in English so I found the equivalent in French.

If you are an alumn and would like to be featured, or know someone who should be, don’t hesitate to let us know at [email protected]