Our IFA Paris – Paris Campus is located at 18-24 Quai de la Marne, and overlooks the famed canal and is at the heart of the developing 19th arrondissement. Our campus has all the necessary facilities such as classrooms, pattern making, draping and sewing rooms, designer atelier as well as a computer room, library, cafeteria and plenty of student work spaces.

This vibrant and artistic neighborhood is also home to many cultural landmarks, including the MK2 cinemas, Point Ephémère performance space for concerts and ballets, and le CENTQUATRE art centre with a wide range of cultural offerings, exhibits and high-profile fashion shows. “The 19th” is emerging as one of the most exciting and stimulating area for students in all of Paris, and IFA Paris is proud to be a part of this neighborhood. In recent history, Paris has turned almost every part of its economy into luxury through fashion, jewelry, beauty care as well as gastronomy, wine and travel. 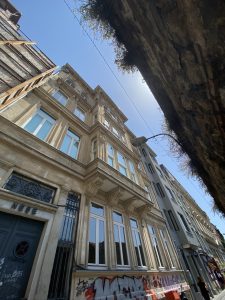 IFA Paris Campus in Istanbul takes us on a historical journey to the historical Mizzi Apartment, where the new campus is located;

In 1893, people representing different languages and identities came together in Beyoğlu Pera, lined up in their small houses with consecutive street numbers. Number 13 looked empty. The number 13, which appeared to be empty because it was under construction year before, was filled with a house name that was not on the street before: Maison Mizzi. This house, where Lawyer Lewis F. Mizzi lived, should have been a small building, but the fact that he called it a ‘maison’ set it apart from the other guests on the street.

Lewis F. Mizzi lived in the house he named for only a few years and moved to Bursa Street in 1989. But the building still bore the name of Maison Mizzi, until 1905 when it was replaced on trade registers as Appartements Mizzi. Maison Mizzi was demolished and the Mizzi Apartment Building, which reflects the architectural style of the period, with its wide facade, high ornamented ceilings and carries neoclassical traces, was built.

Over the years, many high-level names from the celebrities of Pera society to the directors of the biggest stores of the city lived in Mizzi Apartment, and by the 1920s, photographers and patisseries were opened. Street names started to be changed in 1927 pursuant to the Law on “Numbering Buildings and Changing Street Names, Preparation of Signs”. Mizzi could not stand the name change trend for a long time and became Neşe Apartment.

Neşe Apartment, which carries the traces of this period as well as many other periods, regained its ceiling decorations after a comprehensive restoration carried out by Alişan Çırakoğlu in 2006, and started to host architecture studios, artist workshops and a non-governmental organization.

This short historical information is to leave a mark on those who use and will use Mizzi / Neşe Apartment for different purposes today and in the future; invites us to a layered historical reading on who touched the inlaid stair handrails of the apartment before us, how property relations have changed, who contributed to the cost of the place, from the construction of the building to the removal of the garbage.

Our IFA Paris Campus in Shanghai was founded in 2002, in partnership with the Shanghai University of Engineering Science (SUES), IFA Paris is the first Sino-French joint-venture in fashion education. Today, IFA Paris is the leading institute in the fashion and luxury goods sectors in China. It is considered as one of the best performing schools in terms of teaching and creativity. Its teachers, almost all of whom were recruited in Paris, are all experienced professionals in the world of fashion.

IFA Paris is ideal for Chinese and international students with a global outlook, who wish to pursue careers in the fields of creation, fashion, and design.

IFA Paris in Shanghai also gives its students the chance to witness the breathtaking growth of the Chinese fashion and luxury goods markets. It aims to ensure that its students meet the requirements of the local employment market and also those set internationally.